Colmar is a pleasant city, ….

‘it is situated on a fertile plain, far from the mountains, an hour along the track, with large quantities of wine and grain on either side, and the land is good for wheat, onions and other fruit of the garden. This city is the centre of Alsace and is a single league away from Kiesersperg, Ammersweiler, Rechenwyer and Rappoltzweyer, towns that make most excellent wine, the finest of all Alsace’ in the words of one Sébastian Münster in 1552. Yes, 1552! Unfortunately Messieur Münster lived many years too early to be treated to the delicate tastes of Messer’s Pierre Jourdan, Danie de Wet and many more who produce those fine ‘tranquille’ Cabrières, Chardonnays or Sauvignon Blancs way way down south at the tip of Africa. Judging Messieur Münster’s praise for the Alsace wines, I am very sure he would have approved with great satisfaction the younger South African products.

However, he was justly accurate in his description that Colmar is a pleasant city, even beautiful with its stunning, be it slightly confusing architecture. This is France in 2014, but the German Tudor style is in abundance, and beautifully restored, maintained, decorated and neatly painted sitting there just waiting to be photographed or painted. I can’t paint, though. To understand this slightly confusing ‘look’ of this treasure of a French city, I had to ask Google for clarity.

Colmar is first mentioned in 823. Roughly around 1226, Colmar was made an imperial town (city formally responsible only to the emperor in the Holy Roman Empire) by Frederick II of Hohenstaufen, a Roman Emperor. In 1278, King Rudolph of Habsburg gave Colmar its civil rights. Rudolph was originally a Swabian count, but was the man who sort of started the Habsburg dynasty, who ruled much of Europe for nearly 600 years from the 1200s out of current day Austria. Thus, this is the first mention or reason for the German architecture and place names so evident in French Alsace.

Ever since those days, there was a tug of war (pun intended) between the Germans and the French for this beautiful little town. In 1648 the Treaty of Munster handed part of Alsace back to France. In 1871 the Treaty of Frankfurt sees Alsace come under German rule again and a German ‘kommisar’ replaces Mayor Peyerimhoff. In 1883, French is banned from all official documents. On 23 August 1914 a French cavalry rides into town, but hesitantly retreats back into the mountains when the confrontation gets too hot! ‘Zeez French were lovers, not fighters!’ However, on 18 November 1918 the French troops moves into the city and the Tricolor once again is hoisted. It was still not the end, though. June 1940, those dark dark days in European history dawn on Europe and the German troops again annexed Colmar and Alsace. They take it so far that everybody between the ages 14 and 18 is forced to join the Hitler Youth! Then, five years later on 10 February 1945, General Charles de Gaulle marches into Colmar after the battle was one a week earlier.

May 29, 2014, my family and I ride into Colmar after a relaxing full-day road-trip of a mere 440km from Köln through some tiny little roads which included parts of the Mosel Valley, and unpack our weekend luggage. Colmar features as the second town in the recent article ‘The 23 Most Quaint Small Towns You Must Visit Before People Find Out About Them’ on sfglobe.com. So, maybe this post of mine will spoil Colmar for a few future visitors since I can now, after my visit actively promote Colmar as a worthy visit.

‘Quaint small town’, however, is a very loose term for many of these gem towns we so enthusiastically seek out. Europe is really old, as can be seen from the time-line above, which means for a destination such as Colmar, the ‘quaint small town’ is purely the centre old part of town. The village is surrounded by a large busy modern and often ugly outside city which does distract from the experience. In the ‘quaint small town’ of Colmar, we bought our groceries in one of the largest modern supermarkets E.LeClerq I have seen. The E.LeClerq chain is widely spread across France, and I always wonder whether it is the successful result of Messieur Le Clerq, the ‘often disguised as a secret onion seller’ in Allo Allo’s venture.

That centre ‘quaint small town’-part is definitely worth a visit though. It provides ample awe-inspiring old-Europe architecture, the beautiful buildings, people watching, fine cuisine and photo opportunities galore. I often regard the highly spoken of ‘flammekueche’ also known as ‘Tarte de Flambee’ in these parts as a lame effort to copy a pizza and hardly ever order that. This weekend though I was pleasantly surprised by the excellent cheeses the Colmar chefs use to dress their ‘flammekueche’ and I thoroughly enjoyed the local ‘potjiekos’ dish (its more a casserole) called ‘baeckeoffe’

or ‘baker’s oven’ (see the German in this French province). It consists of sliced potatoes, onions (bought from Mssr LeClerq, no doubt), carrots, cubed meat, predominantly beef and pork, which have been marinated overnight in Alsatian white wine and juniper berries before being slow cooked in a traditional sealed ceramic casserole. The taste is further enhanced with leeks, parsley, garlic, marjoram, thyme and time.

As I tend to do, I did drive to the real quaint towns too with a day-drive through the likes of Neuf-Brisach, Breisach, Riquewihr, Hunawihr and Eguisheim. Under the title ‘the most quaint towns’ Colmar can never be visited in isolation. To complete the experience, one has to visit Riquewihr, the fortified church in Hunawihr and the quaint Eguisheim too. Neuf Brisach is a nice to see due to the fact that the town in its entirety is still walled and moated off, but the other three are pristine examples of the feudal medieval towns where the town was build and walled off around the church and market square. Nowadays there are plenty of little bistros, cafés, bars and restaurants lining the streets amongst the ‘vinstube’, cheese merchants and in general typical local merchandise aimed at the tourist market. To complete the picture, these little villages are nestled in the midst of the famous Alsatian vineyards, which prompted me to make a note to visit the area in autumn again.

An environmental feel-good story in this part of Alsace is for sure the breeding of the storks. I remember reading a book in primary school translated from Dutch into Afrikaans as ‘Die wiel op die skool’ (the wheel on the school), which was a story about the school providing nesting to a stork. Well, that is all I remember of the story, or maybe not even. I suppose the name gave me a hint. Nevertheless, I have now seen it with my own eyes. Many a roof in Alsace, even in the centre of towns, have a wheel of some sorts on its roof, with a breeding stork happily returning the stares of the tourists in the streets below while caring for their young.

As a dog owner, the term Alsatian obviously rings an inquisitive bell. I found the explanation rather interesting. The name German Shepherd, for the Deutsher Shäferhund, a breed which obviously originated in Germany, was changed by the UK Kennel Club after World War 1 due to the belief that ‘German’ in the name would harm the breed’s popularity due to the negative sentiment towards the Germans at that time. Thus, the UK Kennel Club officially changed the name to ‘Alsatian Wolf Dog’ after the name of the French German border area of Alsace. Many other international kennel clubs used this name. The name was officially changed back to German Shepherd in 1977, though ‘Alsatian’ is still often used in parenthesis.

The camping scene in Europe is a curious but very healthy industry, which covers a wide range of different vehicles and tents. I was pleasantly surprised to find a real stove-like fireplace in our pitched tent, complete with wood and chimney through the canvass. Novel touch by the French! The most popular camping for the Europeans are definitely the motorhome (various shapes and sizes) and normal caravan. However, tiny tents, from one consisting of only a stretcher bed with a meter high tent on the stretcher to old-timer restored VW Kombis (as we know them in South Africa) and completely fitted Land Rover camper vans grace the lawns with their presence. I wonder if that Swiss Land Rover has ever put rubber to a dirt road. A number of people cycle, others travel by motorcycle and a few hitch-hike with their rucksacks if not using conventional transport. But the travel and sightseeing scene is truly alive and well in the rural areas of Europe.

So, yes, I agree with the article in http://sfglobe.com/?id=908&src=home_feed regarding Colmar. Incidentally I have also visited Annecy and can vouch for that too. And where they state in the article ‘We advise you to plan a trip before they become too crowded!’ I sincerely hope my blogpost regarding Colmar doesn’t make your planned trip too late. However, feel free to contact me for advice when you need advice or help or a chauffeur!

I am so looking forward to our summer tour to Italy in a few weeks. 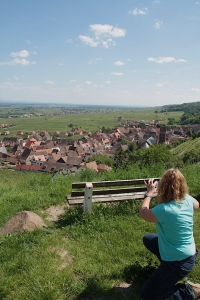 4 thoughts on “Of Alsations, casseroles, villages and storks”

Afternoon (yes afternoon as in before 18:00) strolling, and maybe, just maybe, stopping for a beer on those inviting pavement chairs #streetphotography #travelphotography #streetcafe #Bars #Beer

Afternoon (yes afternoon as in before 18:00) strolling, and maybe, just maybe, stopping for a beer on those inviting pavement chairs #streetphotography #travelphotography #streetcafe #Bars #Beer
Autumn in the Mosel Valley #autumn #travelphotography #cycling #riverboat #vineyards
I’m thinking. Camping in autumn in the beautiful Eifel in Germany. What a delight to find a stunning nature camp with campfire facilities #travelphotography #campfire #camping #fire #thinking
Just love autumn cycling in Europe #cycling #autumn #travelphotography #husqvarna #bicycle
‘Oostpoort’ or the eastern gate of Delft is the only remaining gate of this beautiful town. It’s a stunning example of brick Gothic architecture. In 1359, the original had to be demolished because Delft lost a war to ‘Hertog Albrecht van Beieren’. It was rebuilt and heightened with the last big renovation in 1572 when Willem van Oranje ‘moved to town’. #oostpoort #easterngate #gothicstyle #architecture #citywalls #travelphotography
‘Scheve Jan’ or Old Jan or Oude Kerk in Delft. This is the old church, founded in 1246. It’s a Gothic Protestant church. And yes, it’s also a leaning tower; about 2 metres off vertical. The tower is 75m high, and I live further than that from the leaning tower😏 #oudekerk #architecture #travelphotography #travel