‘…. I had this perfect dream

This dream was you and me

I want all the world to see

My guide and inspiration

Rugby is and always will be my game.

However, since we attended two Confed Cup games in 2009 and 11 World Cup 2010 games back in South Africa, the family are all huge soccer (I know its football elsewhere) fans. And with three Barcelona and one Leverkusen supporter in the family, the Champions League draw earlier this year played so well into our hands when the draw resulted in Barça versus Leverkusen. For the not informed, this means an away and a home game between these two teams. Leverkusen is to Köln what Centurion is to Pretoria, thus sort of our local team.

In February Barça won their away leg in Leverkusen 3:1.

After an evening of rock and general ‘being proudly South African’ in the performing company of Prime Circle (and a guy wearing a Cheetah rugby jersey) in the Blue Shell, Köln, we joined three planes full of Leverkusen supporters on Wednesday morning 07:15 en route to Barcelona for a day trip. Arriving at lunchtime, it was fortunate that we could spend the afternoon strolling the streets and La Rambla.

In my book, a big part, and obviously hugely enjoyable part of traveling is the local cuisine and customs. We had only the afternoon to explore Barcelona (fortunately Heleen and I have been there on a previous visit) but probably being blasé we all agreed that its better to do fewer things and do them well than to squeeze too many things in and not doing anything properly. Thus sitting down in a café for tapas and wine

was the logical choice. With a view over the harbour, the sun in our eyes and many foreign languages around us we sucked in the lunch feeling of one of Europe’s (and the world) great cities. Summer in Europe is drawing nearer and getting the feel in the few-degrees-warmer-than-Köln Barcelona enthused us to look forward to the evening’s Camp Nou experience.

After strolling the downtown streets and before departing for Camp Nou we had to sit down in La Rambla for a ‘quick’ beer. Be warned, when you order a beer you should specify the size required!

And then we headed towards Camp Nou; the iconic Camp Nou which is the home of greats such as Messi, Xavi, Pique, Puyol, Fabregas, Iniesta, Alves, Guardiola to name just a few. Remember that we bought our tickets and transfers through the Leverkusen (the opponents for the day) travel agency and were thus transported as Leverkusen supporters. In Europe in soccer, this has certain implications, which we thought about but who’s significance we did not understand. It can even become dangerous to be a supporter of the other team if you’re in the wrong place. Fortunately no conflict other than raised eyebrows was bestowed on us, wearing Barça shirts amongst the Leverkusen fans. However, arriving at the stadium, Camp Nou, the Leverkusen buses were waved into a ‘secure’ drop-off zone, and we were at first not allowed to leave this area and group. It means there are a physical separation between the Leverkusen fans and the rest of the stadium. Fortunately Heleen can negotiate well and she was able to convince the policeman that we are Saffas and Barça supporters just traveling on Leverkusen terms so he let us through and we were able to stroll the streets and stalls around the stadium as ‘free citizens’.

And shake the foundations from the skies

And then it was the game!

The biggest game you’ve ever seen!

I’m proud, privileged and truly glad that I can say that we have seen a world-class performance of an unrivalled Barça team that evening. Systematically and clinically they took Leverkusen apart to lead 2:0 at half time and to finish as 7:1 winners, which included a superb 5 goal haul for ‘la pulga’ (flea), Lionel Messi, and 2 brilliant Tello goals. At the 2010 World Cup we were at the 4:1 drubbing of England by Germany in Bloemfontein as well as the Spain beating of Germany 1:0 in the semi-final in Durban, which were both great games. But this Barça performance and being part of this piece of Messi magic was something I will never forget. So great was the performance that even the Leverkusen supporters later honoured Messi with standing applause as he scored, and giving us friendlier smiles as if to acknowledge that tonight, only tonight, it was OK to wear Barça supporters attire.

The conflict and fighting at soccer matches are well documented and televised and is a huge headache to police. Though there was none of this at Camp Nou that evening, as a precaution the visiting team has fenced in seating, complete with nets in front of you so that nothing can be thrown onto the people in front of you. After the game, we were held back for 45 minutes, to allow the Barça supporters to disperse before we were allowed to leave our seats. Our flight back was scheduled for 03:40 so we had time for a late dinner in Barça before heading for the airport and trying our best to get some sleep on the hard airport seats and floor. Next day was a normal school day for the kids, thus every minute of shuteye was important, though Cara was so excited with her team’s performance she couldn’t sit and sleep, but wondered the corridors of the airport smiling instead. 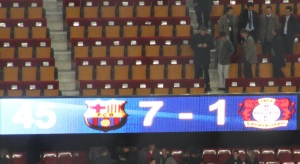 Its better to travel hopeful than to arrive, and we are currently enjoying and making the most of our ‘travel’ opportunity. We set off on this European stint to experience and see things, which is not readily available from South Africa. In my book I have ticked the Camp Nou, a live Barça game and I can make a little note next to it saying, ‘successful, satisfied!’ 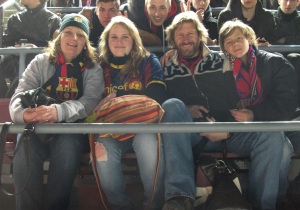 ‘….where the lazy Tiber flows, and where yesterday still grows ….’

Allez Racing, allez, an earlier blog post refers as that post in the end cost me a few bucks, but also delivered a hugely memorable weekend in Rome in February.

After it became known that we supported Racing over London Irish in Paris, some of our friends in the UK took offence and committed us for a weekend in Rome. Jenny phoned and announced ‘we bought tickets, will we see you in Rome?’ Who wouldn’t jump to the opportunity to spend a weekend in Rome, see your South African friends (who is living outside London) and attend the Six Nations clash between Italy and England nogal?

And what a terrific weekend it turned out to be!

The weekend started off on Friday with our flight midmorning from Dusseldorf Flughafen, which meant the kids ‘had a day off from school’. Obviously that already was a treat and just the incentive to become ‘tourists’ for the weekend. Also referring back to my first blog post, 20 Oct 2011 it needs to be emphasized that we came to Germany to have access to Europe and its new experiences, which it will present to us. Thus, every now and then, the ‘lammervanger’ will have to be sidestepped when we give the kids some time off from school to enable something such as flying somewhere for an extended weekend or event. Its simply part of what we do.

February was an extremely cold month and it was evident in Rome too, which is supposed to be warmer than Köln, being in the Mediterranean. But the cold was one of the many factors that contributed to the lasting memory of this weekend.

Accommodation is always a challenge as it is always expensive, you’re never sure what you’ll get and in winter, very important that you sleep warm. Heleen found a self catering apartment at 24 Via Genoa, which is ideally situated within walking distance from old town Rome, with mind boggling historic sites such as the Colosseum and the Mamertine Prison to name just two. It was a three bedroomed with en suite bathrooms, ideal for the group of 6 and with a fully fitted kitchen to do your own brekkies.

The Marmetine Prison consists of two gloomy underground cells where Rome’s enemies were imprisoned (and usually died), of either starvation or strangulation. Famous prisoners here include the Goth Jugurtha, the indomitable Gaul Vercingetorix and, according to legend, St. Peter.

Several ancient writers, including Livy, who dated its construction to the 7th century BC under King Ancus, mention the Mamertime Prison:

“It was found that in so great a multitude the distinction between right and wrong had become obscured, and crimes were being secretly committed. Accordingly to overawe men’s growing lawlessness, a prison was built in the midst of the city, above the Forum.” (Livy 1.33.8)

Furthermore, imagine the magnificence of the Colosseum. I realise not all are equally fascinated by history, but standing at the foot of a ‘sports’ arena on which construction started in 72 AD, which seated 50 000 spectators and where many people battled for their lives is one true awe-inspiring experience. This is a stadium the size of Loftus Versfeld and it too housed bloody battles, just centuries before the first Loftus battle!

We strolled through these world famous and truly magnificent sites on Saturday morning, but we were in Rome for a modern day battle and in another stadium, the Stadio Olympico Roma, a battle in the six Nations rugby tournament between Italy and England.

The previous evening it started snowing, which, according to our evenly amazed waiter, was the first time it snowed in Rome in 27 years. By Saturday afternoon when we arrived at the stadium, it was snowing so heavily that rumours of the match being cancelled started amongst spectators. The atmosphere was so festive though, that it was simply amazing to people-watch and definitely worth the effort and cost to be there. The playing surface was covered in a layer of snow, it was still powdering down an hour before kick-off, but nonetheless the stadium was one huge ‘Peroni’ party, complete with beer and

There was a humorous link to the cruelty of the Colosseum though, in that while the party on the stands was festive and loud, there were a couple of ‘slaves’ in the centre arena, slaving away with brooms and shovels in an effort to clear the snow from the playing pitch.

With still some snow on the pitch, the game was not called off and kick-off was not delayed. Fortunately, by kick-off it had stopped snowing although it did on occasions snow during the game again. And since I had the question after my Allez Racing post where I declined to provide the result, again my team lost as England scraped in a victory. This second loss simply means I need to pursue more sporting occasions in Europe, at least until I taste the sweet taste of victory, maybe sooner than later.

When in Rome, do as the Romans do!

It’s the one thing that is so totally different in Europe than in SA. People are not afraid to walk. Its winter and the streets are covered in snow but the entire stadium simply hits the road walking after the match and heads back to town. We did stop ¾ of the way home to dig into some excellent pastas and pizzas (when in Rome ….) and then walked back to the apartment, but in the end it came down to a 6 km walk.

Thus, thanx to Jenny’s ‘challenge’ I could tick another great weekend and experience with the added novelty of test rugby played in snow to our growing bucket list of things to do while in Europe.