Everybody has that one favourite T-shirt. Maybe you don’t even wear it anymore, for whatever reason. Maybe it is simply too worn-out or it has shrunk too much under your ageing belly, but you don’t have the heart to get rid of it. I have one too and mine has a quote, accompanied by the face of Nelson Mandela, stating

‘History depends on who wrote it’.

History may have two sides, but sometimes that history is simply so dark, so gruesome, that the different sides to the stories become irrelevant and the horror of the history is the only thing that stands out.

We loaded the grandparents and headed off to such an area, The Somme Valley in North Western France where that infamous battle raged from July 1 to November 1, 1916.

We started with our round-trip by staying over in the Belgium beach town of Middelkerke. Though we enjoyed pleasant walks on the flat sandy beach with a backdrop of ugly Amanzimtoti style high-rise blocks of flats, I was aching to get into the hinterland and explore some battlefields. We found charming glamping tents on a pig farm Het Zeugekot (saying it like this sounds much less charming than it was), in Belgium near the small town of Beveren (Roesbrugge-Haringe), which was our base for a few days while we explored some battle sights, and the two charming charming cities of Ghent and Ypres. Be careful with some of these European landlords though. We unfortunately left the tent flaps open, as it was a sweltering heat wave of 39° C, and we weren’t back at the tent before a beautiful thunderstorm broke out. The storm did result in a couch cushion getting wet and needing a wash, but that little wash cost us the full deposit – a €150 wash that was!

Ypres (or Ieper in Flemish – it is located in West Flanders and called sarcastically ‘Wiper’ by the English during the War) was heavily involved in World War I as the Battle of Ypres seethed here. War cemeteries and even trenches

can be seen and visited all over this area. In the town itself I was mesmerised by the ‘Menin Gate War Memorial to the Missing’. Its a war memorial ‘gate’ where every evening at 20:00 the ‘last post’ is sounded as a gratitude from the people of Ypres to those who sacrificed their lives in battle. Its large Hall of Memory contains names on stone panels of 54,395 Commonwealth soldiers who died in the Salient but whose bodies have never been identified or found – simply missing.

Ghent must definitely be one of Europe’s most beautiful cities. Ghent is small, captivating and architecturally in a different class. It has history in abundance, including a castle (Gravensteen dating from the 10thcentury), cathedrals, canals and trade houses within a very small centre ‘ville’. Ghent’s Graslei and Korenlei is a well-known photographer’s delight.  The Graslei and Korenlei are two quays on the banks of the Leie River and which was part of the medieval port. It now forms the hub of the old town, where cafés, bars, restaurants, street vendors and other delightful spots line the banks of the river. Some members of my touring party may differ, but those homemade local delicacy Belgium sweets are pretty disgusting. At least its been ticked off some bucket list. It’s a well-known fact that Belgium is big on beer, and I now know, after our canal tour, why. Drinking beer was a matter of survival. In the middle ages, everything in towns such as Ghent was done around the rivers and canals. This meant the water was rather dirty, smelly and generally not for human consumption. Beer was brewed to provide ‘clean’ drinking water, and that was used to quench your thirst instead of water. Apparently even the babies would get beer in their bottles!

We moved from Belgium to a delightful gîte in a small peaceful rural town Villers-sur-Authie, but here things turned a little dramatic. Without getting into too much private detail, it was with this unfortunate medical incident that I realised why France’s medical system is seen as one of the best in the world. Without any big fuss, payment questions, pre-authorisations or any other enquiry, our medical emergency was handled with a mind-set to cure, not ensure bills are paid. Probing about potential costs using Google translate with the doctor when she announced she arranged a helicopter to transport our patient to a bigger hospital, her answer was simply, ‘he needs it, we’re doing it’. This entire episode was a learning experience which warrants its own story at another time, but it included a lot of real-time Google translate (I never realised how French the rural areas are), helicopter airlift to bigger hospital, intensive care and excellent aftercare; all with virtually no paperwork – being sick is enough. The French doctors and medical staff in general were exceptional, facilities world class and focus on the patient – not like the 600% of standard tariff doctor in South Africa who askes ‘how are you going to pay’ on your way to hospital before the operation!

Amiens (pronounced Amiaañs with a very nasal silent ‘n’ and even more silent ‘s’ – please, we’re doing this right) is the city serving the Somme Valley where so much horror happened in those few months in 1916, when the Battle of the Somme raged so fiercely. The city itself has a beauty of its own with a decent modern pedestrian area, the impressive Cathédrale de Notre-Dame d’Amiens at its heart and Quartier Saint Leu, the funky restaurant area just a couple hundred meters to the northeast of the Cathédrale. Also worth a mention is that the house of Jules Verne, in which he stayed while writing Around the World in Eighty Days is in Amiens (pronunciation, you’re already slipping), just a stone’s through away from the centre and I have a ‘selfie’ to prove it.

I was very one-track minded and now only interested to visit the battlefields and little towns where that lunacy took place 100 years ago.

Thirty kilometres northeast of Amiens is the town Albert, where the first two weeks of The Somme offensive took place.  It was one of the bloodiest incidents of the war with 100,000 Allied soldiers sent over the trenches on day 1, leaving 60,000 injured and 20,000 dead. In total there were 1,000,000 casualties and 300,000 simply missing in the brutal fighting.

We spent real quality and fascinating time in the bunker museum in Albert, I had a South African urge and calling to hit the road the 15km further, through the small town Longueval to get to the South African War Memorial at Delville Wood (Bois d’Elville). This wood, or the one tree that was left of it, and the land was purchased shortly after the war by the South African politician and writer, Sir Percy Fitzpatrick, which was then bought back by the French Government for one Franck, and given to South Africa in perpetuity.

Walking through the memorial graveyard and then the monumental Memorial itself was my highlight of our summer holiday. It was a true remembrance day, and though I do not personally know of uncles or grandpas in my direct family who fought there, it was a patriotic and bone chilling experience to scan through names and observe the familiarity. The Herbert Baker designed monument is magnificent, and the storyline presented by the South African Museum Authority well thought out and inspiring. It’s a memorial to all South African soldiers who fought and died in overseas conflict, and definitely well worth the visit.

Behind the museum itself stands one original Hornbeam tree, which survived the ferocious shooting and bombing. The South African Government has replanted the wood though and it is today a gorgeous setting. 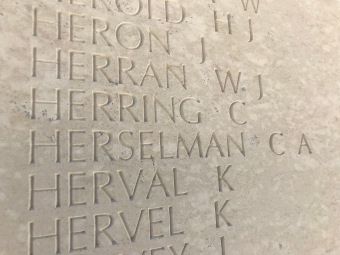 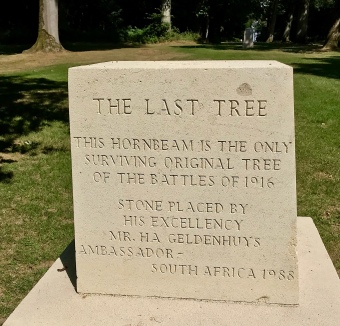 All Allied nations have their own memorials in the area where the Battle of the Somme took place, and it is a tourist destination of note. It is a serious place, a remembrance place, and as with so many historic sites I have visited in Europe it leaves you with a turning stomach and continued thoughts regarding the evil in man.

Driving back from Delville Wood, we took a brief detour at Albert to visit the site of the largest man made crater from the War. This site is the Lochnagar Crater. The extent of the war and how it was even taken from the trench warfare to underground war is clearly evident in the story of this crater. Just outside the town La Boiselle, this no-man’s land between the two fronts has become really narrow to a point where the two fronts were just 46 metres apart. On both sides, tunnels were dug and charged with explosives, and it was extremely tense, as they never new whether they will tunnel into enemy underground.

Captain Stanley Bullock wrote ‘The Germans worked for a shift more than we did and then stopped. They knew we had chambered and were afraid we should blow and no more work was done there. I used to hate going to listen in that chamber more than any other place in the mine. Half an hour, sometimes once sometimes three times a day, in deadly silence with the geophone to your ears, wondering whether the sound you heard was the ‘Boche’* working silently or your own heart beating. God knows how we kept our nerves and judgement. After the Somme attack when we surveyed the German mines and connected up to our own system, with the theodolite we found that we were five feet apart, and that he had only started his chamber and then stopped’.

The Lochnagar mine was detonated on 1 July 1916 at 07:28, and created the current crater measuring some 67 metres in diameter, and it is said that the trenches above it was filled with German soldiers.

In Flanders fields the poppies blow

Between the crosses, row on row

That mark our place; and in the sky

Scarce heard amid the guns below.

We are the Dead. Short days ago

Loved and were loved, and now we lie

Take up your quarrel with the foe;

To you from failing hands we throw

The torch; be yours to hold it high.

If ye break faith with us who die

We shall not sleep, though poppies grow

* ‘Boche’ refers to a German soldier in derogatory terms

9 thoughts on “Summer in the sombre ‘The Somme’”