Though Lufthansa may be at risk, due to their lack of customer service (see my previous post Flight LH572 July 22, 2016 : An ugly story), we eventually did arrive in South Africa, and we did enjoy all the promised ‘braais’, ‘kuiers’ and catch-up with all and sundry; exactly the things Expats do when returning home for a visit. It was fortunately not ‘allesverloren’!

A truly special place is the Kgalagadi. Its one of those places which I truly wish I could show off to everybody I meet in Europe. It’s a pristine wilderness in the dry western parts of South Africa and Botswana as God intended and where wild beasts roam freely. The Kgalagadi Transfrontier Park is one of the most pristine conservation areas on earth, and that was the first destination of our two week Kgalagadi and Namibian safari.

Special places require special equipment. Though the Kgalagadi Transfrontier Park has normal dirt roads and its theoretically accessible with a sedan, its not advisable. Even when the roads are well maintained, you are still confronted with high sand walls next to most of the roads, which means while we are scanning the wide plains for Oryx, Springbuck, Lions et al from the raised elevation of the Land Rover, the sedan driver scans a meter high sand wall for ants, grouse and desert rats! To fully enjoy the Kgalagadi, one needs to have a bakkie, kombi or similar high, big tyres vehicle. 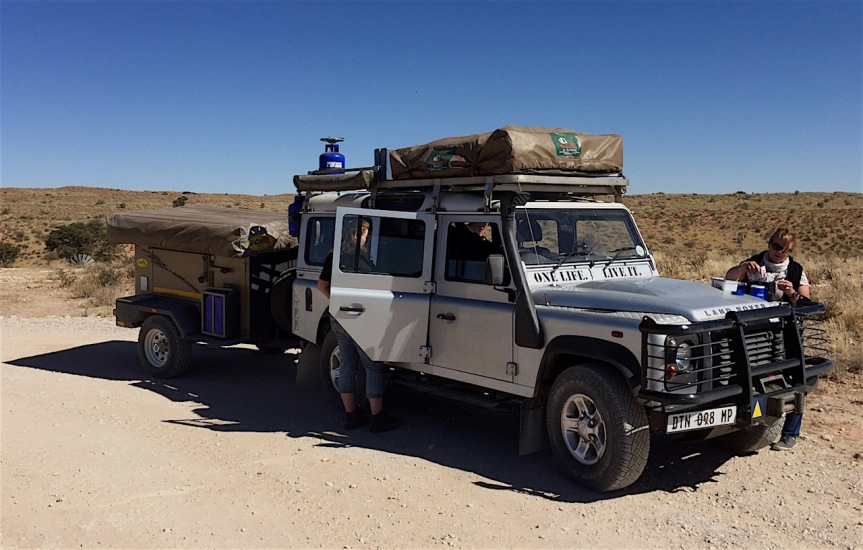 Speaking of Land Rover, that’s special equipment number one. And wasn’t ours special? Thus, next piece of advice, if you plan a trip there, and don’t have easy access to an ‘off-road’ vehicle, get a brother! I have a brother, and when he heard of our plans to travel the Kgalagadi and Namibia, his preparation kicked in immediately. He ordered (not offered, ordered) that we will use his Land Rover Defender. I have an Echo 3 off-road trailer, but we needed a capable vehicle for our trip, and this Rian immediately recognised and provided a solution for. For months on end he spent equipping the Landy with sliding drawers, sliding fridges, warm water system and shower, water tanks on roofrack, roof top tent, awnings, and everything else one would need. This Landy even has a little whiskey tank with tap in its bull-bar, for headache’s sake! This meant that all I had to do was to load the meat, wine and beer into the fridge, add a potato, set the GPS to Murrayfarm, Askham (S 26° 58′ 59.99″   E 20° 52′ 59.99″) and activate the iPod playlist.

First rendezvous was to meet up with Andre and Rentia near Krugersdorp, from where we would jointly finish off the 922km stretch for the day. It’s a bit of a boring stretch of road through a not very scenic area, but we were treated with some spectacular sandstorms on the way. Late afternoon with the sun setting we pulled in at the Veldkamp of Murray Guest Farm where Francois and Talitha already had the campfire going. They drove from Wilderniss to Upington the previous day, which meant they only had a leisurely 200km cruise for the day.

Askham is the gateway town (dare I call it town?) to the Kgalagadi Transfrontier Park. If you plan to buy provisions there before entering the park, you may be disappointed, but you may fill up the diesel tanks, get those last minute cans of sheba, pap, some vegies and other basic stuff which you may have forgotten. However, there is this quaint restaurant (Diamond T Coffee and Gift shop) where they have the most magnificent venison (and other) meat-pies and ‘mekltert’. Though one should definitely not miss this stopover before heading into the arid bush, its easier said than done. Askham is so small that its rather easy to miss the entire town (my family still mocks me) and if you do, turn back for that ‘melktert’.

Click on the video, its mine, not an advert

Kgalagadi Transfrontier Park is a vast wildlife preserve in the Kalahari Desert region of Botswana and South Africa, bordering Namibia to the west. It’s an arid desert area characterized by red dunes and dry rivers, though it is currently experiencing the tremendous sight of flowing Nossob and Aoub rivers. Wildlife is spectacularly abundant and includes migrating herds of wildebeest and springbok, the most beautiful Oryx plus predators like raptors and black-maned Kalahari lions. There are 280 species of birds alone, of which some 90 are resident. Our next stop, for four nights was Rooiputs wilderness camp in the KTP. There are three mainstream camps where one can camp fenced in, but we opted for the unfenced wilderness camp, since I truly needed proper Africa after being in Europe for a few years. One has to be self sufficient to stay in Rooiputs, though there are long-drop toilets, cold showers and running water from a borehole.

Having grown up in South Africa, having travelled South Africa extensively while living there and having experienced many wilderness camping 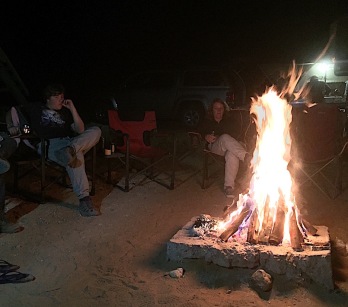 adventures, I am not sure whether people who have not experienced wild camping in the African bush, will truly understand. You don’t do much, but you are there, in it. You drive around experiencing nature, watching wild animals. Animals in their natural habitat and in an area, which has never been fenced, farmed or built up. Its still as God created it.
It is an overwhelming privilege and experience to have. And then, returning to your camp, you make a fire, a proper campfire with long burning hard wood. There you sit and chat and laugh and debate and get nostalgic, or sometimes just sit and stare, Lufthansa long forgotten! That’s what we did for four days. It was as if we were in heaven.

Though there are plenty of species of mammals, we were extremely fortunate to see lions twice, including the playful two young brothers, as well as the cheetah mother with her four cubs from up close and for prolonged periods of time. We were furthermore treated to the stalking of a springbuck by the cheetah mom. While I’m raving about the pure joy and wonder of the nature wilderness, it has a downside too; people, or tourists. There’s just always an idiot! This time it was the guy who climbed out of his car and onto the roof (to see better) during the cheetah stalk. This behaviour resulted in the springbuck running away and the cheetah having to abandon her efforts. Obviously it was disappointing for us, but I could see the irritation in the faces of the four cubs, who realised there goes their dinner! 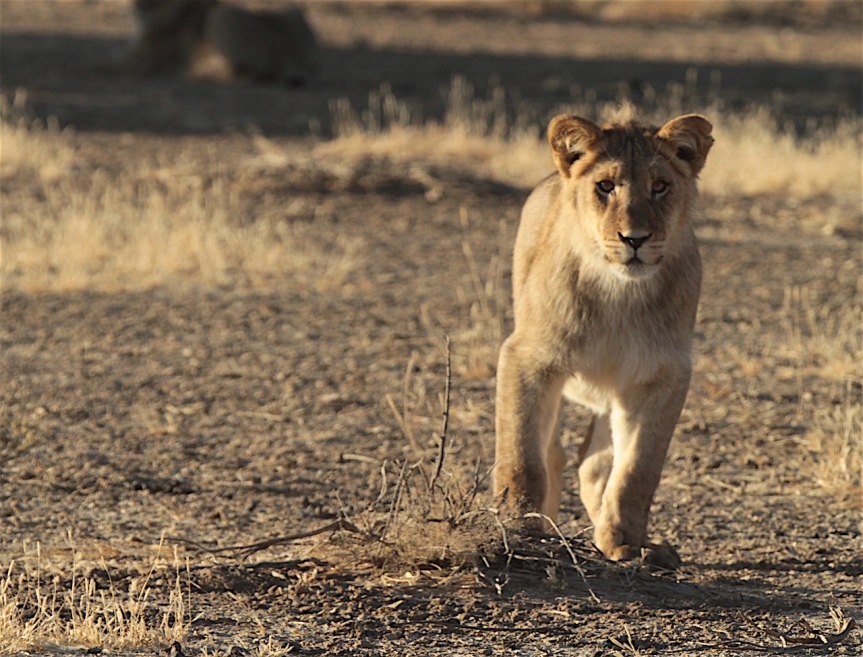 The Kgalagadi is not just a scenic natural wonder, but extremely rich in history too. And some of this history is captured in place names. These vary from outlandish gems such as Monro, Dalkeith and Craig Lockhardt (to be read in heavy Scottish accent), local ones such as !Xaus (click your tongue), Bosobogolo, Guruxa!nas and Kaa to obviously Afrikaans including Marie se Gat, Jan se Draai, Leeuwdril and Rooibrak. Leeuwdril means ‘Lion shiver’ and tells the story of Matthys who came face to face and unarmed with a Kalahari lion. The lion stared at Matthys for a while and then wondered off. Matthys was shivering in his boots for quite a while after that stare down. And then the one beaut of an English one, Union’s End, which together with Crook’s Corner in the north-eastern corner of South Africa, (located within the Kruger national park), are truly remote and far-out corners of what was once called (under the English colonist rule) the Union of South Africa.

On day four, it was time to move on. Francois and Talitha said their goodbyes and headed back to Wildernis, while we headed north-west, towards Mata Mata and its border post. We still had 10 days ahead to explore the vast distances and rugged beauty of the Namib and Etosha. Distance for today was 774km of dirt road; pure ‘lekkerte!’

For detailed further reading on the park, visit https://www.sanparks.org but note that you could also contact the Department of Wildlife and National Parks, PO Box 131, Gabarone, Botswana (tel + 267 318 0774). Rooiputs where we stayed is on the Botswana side of the park, and have to be booked through the Botswana offices. 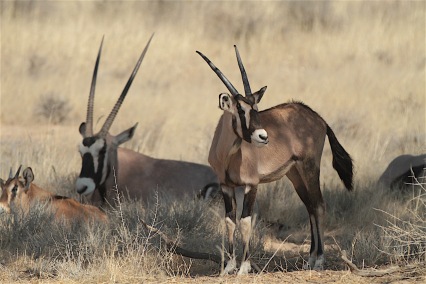