‘On day four, it was time to move on. Francois and Talitha said their goodbyes and headed back to Wildernis, while we headed north-west, towards Mata Mata and its border post. We still had 10 days ahead to explore the vast distances and rugged beauty of the Namib and Etosha. Distance for today was 774km of dirt road; pure ‘lekkerte!’’

Mata Mata is one of the three conventional camps in the Kgalagadi and lies on the eastern border of Namibia with the convenience of a border post. One can enter and exit Namibia at this post if you stay in the Kgalagadi Transfrontier Park for two nights, preventing the park becoming a transit route, which is obviously a good rule. Namibia has vast distances and travellers more often than not underestimate the travel distances and times. I too made that mistake. Not so much in my planning, but more so in my execution. Enjoying the goodbyes with Francois and Talitha, the showers in Twee Rivieren and the game drive from Twee Rivieren to Mata Mata too much, meant that we exited South Africa about three hours later than initially planned. We still had 570km to cover from Mata Mata to Sesriem, and it was already after lunchtime. Of the 570km 90% was dirt roads, which translates to at least 8 hours of driving. Its normally not a problem, but this being wild country with plenty of wild animals, its not wise to travel after sunset. That clichéd quote ‘its better to travel hopeful than to arrive’ really rang true that evening, with frequent encounters with oryx, zebra, kudu and other large animals roaming the roads in the dark. Fortunately, we travelled well and arrived safely at Sossus Oasis Camp Site, Sesriem. 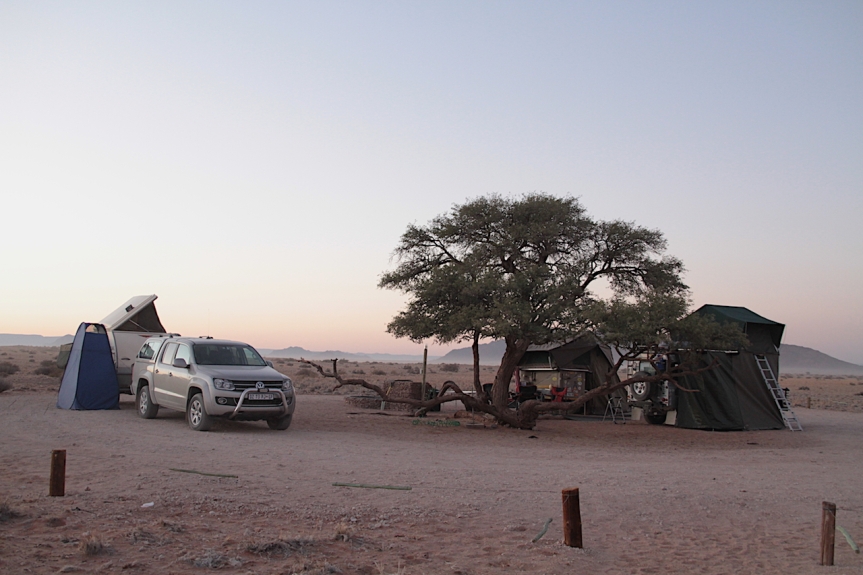 Namibia must be one of the best-kept secrets and I actually don’t want to promote it too much through my blog, as I’m afraid of more people traveling there and spoiling it for us selfish ones. It is pristine, wild, mostly dry, tranquil but rough and expansive. And why I have a very selfish stance on trying my little best to keep it that way is because people spoil things. Sitting and enjoying our campfire late afternoon the next day, sipping a Pinotage from Tulbach and not speaking much, the serenity was abruptly ended by an Englishman and a German entering a particularly abusive shout-fest over their camping spot and access to the electricity. Right there and then, Europe spoiled a perfect African setting for the better part of an hour. But the rough beauty of the place convinced me to ignore them and enjoy the splendour of God’s creation.

Sesriem is the minute community thriving on tourism at the entrance to the Namib Nauklift Park and world-renowned Sossusvlei and its photographic wonder Deadvlei. It’s a 60km drive on tar into the dunes to reach Sossuvlei, and then a further 4km of 4×4 stuff to reach the real destination, Deadvlei. As I said in my previous post, Kgalagadi, we were fortunate to be extremely well equipped for this trip and driving past all the tourists slogging through the sand proverbially following a guide with a flag-on-a-stick we enjoyed the snobbish feeling of parking, erecting the awnings and tables and chair and enjoying a picnic with ice cold Sauvignon Blanc, cheese, meat and beer before taking on the 1.5km walk though the sand towards Deadvlei. For a very very short moment I felt guilty for my gullible feeling of satisfaction, but then I took a sip from my beer-Friday that Andrè unceremoniously pushed into my hand and all guilt was washed away.

Please click the video, its home made. Well, not the music, that’s all Johnny K and Valiant Swart

Sometimes words are redundant while pictures speak the thousand words, and that is the case with many of the things we saw in Namibia; and its definitely the case with Deadvlei. Deadvlei is a photographer’s dream, and even though we were there in the harshest midday sunlight, the photos and video illustrate that you can spend many hours just strolling, clicking and relaxing there. Vlei is the Afrikaans word for marsh and though this is in the middle of a real unsympathetic desert, this vlei’s origin stems from a running river. The clay pan was formed after rainfall, when the Tsauchab River flooded creating pools and often in good rain seasons, the vlei has water. When climates changed and got harsher, the sand dunes encroached on the pan, which blocked the river from the area. The camel thorn trees died due to the dry conditions and they now play their part in creating the beautiful photos taken in the vlei. It is reported that Deadvlei is surrounded by the highest sand dunes in the world.

The huge dunes of Sossusvlei 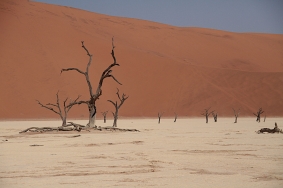 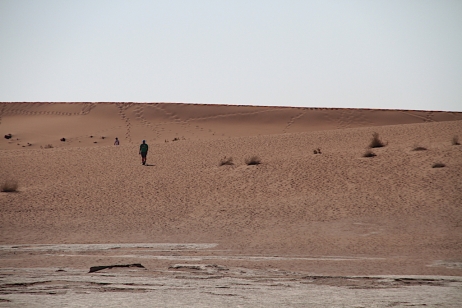 Just outside of Sesriem, we strolled down into the Sesriem Canyon. It is from the depth of this canyon that Sesriem takes its name, as in the old days, you needed six oxen ‘belts’ to lower your bucket down to gather water for your travel party. A ‘riem’ refers specifically to thin leather belts used in pulling ox wagons and tying things down.

Swakopmund is a seaside town where we spent one night, again because the drive from Sesriem north took so much longer than I anticipated at first. Though we didn’t see much of Swakop, I saw enough of Brewer and Butcher (https://www.tripadvisor.com/Restaurant_Review-g298357-d8736319-Reviews-Brewer_Butcher-Swakopmund_Erongo_Region.html ) to know that here you can get stuck. It’s a German brauhaus style restaurant with a good menu and ambience and their first-rate service plus the spontaneous coincidental meet-up with friends Tiempie and Koba made for a perfect stop-over and battery charge evening, before hitting the dirt, dust and plenty kilometres heading north, to Etosha.

Our route took us past Uis, a town which was part of the old Yskor mining division when I worked there in the 90s and where we mined tin. I never had the opportunity as Yskor employee to visit Uis, and thus the brief stopover satisfied a yearn from days gone by to actually see this place. We headed north towards Khorixas when we were amazingly blessed to see the desert elephants of the area in plain open sight grazing the riverbed. It’s a sight not many people see as these elephants are not part of a specific managed conservation park, but still free roaming in a fairly rough part of Africa.

At the centre of what is the Etosha National Park is the massively impressive Etosha salt pan, a 120km long and 50km wide dry lake bed. I say dry, as its dry for most of the times, though some spectacular rain and water covered episodes do occur. When we there in August 2016, though it was dry and dusty. The entire park spans some 22,270 square kilometres of untouched Namibian Kalahari bushveld where one can experience prime game viewing and nature experience. Etosha means Great White Place, and here too is a heavy reminder of colonial times. As long ago as 1889 German troops built a fort at Okaukuejo. After an attack and destruction by the 500 fighters of Nehale Mpingana in 1904, the fort was rebuilt and troops stationed there once again. The area was declared a game reserve in 1907 and Lieutenant Adolf Fischer then became the first game warden.

We were there in off-season for the southern African schools, which meant we were just about the only South Africans or Namibians in the park. I specifically noticed the sign-in registers at the camps and as far as I could see all other tourists there were from abroad. Its great, contrary to what I said earlier in this blog, that many foreign tourists do visit these far-off destinations, especially as the going is fairly rough.

One has to enjoy camping and driving. It was here, in Halali camp where we sat amused at the ‘Europeans’ and their lack of bush savvy, and it was here where one local tour operator found comfort and refuge around our campfire to get away from his French tourists. He heard us speaking Afrikaans and with jovial ‘hallo hallo mense, julle praat dan Afrikaans’ (‘you guys speak Afrikaans’) he bemoaned his fate with the foreigners to us. The camps in Etosha all have water holes next to the fence of the park, which have spotlights illuminating the water hole at night. One has to walk about 800 metres through a little pedestrian bush way to get to a lapa under which you can then sit and observe animals across the fence. My kids came back with the message of a couple of rhino drinking and interacting at the hole, and advised our new found tour guide friend to tell his French guests about the great opportunity to see the rhino (black rhino, nogal) at close range. As quick as a flash, they all jumped into their truck, with an urgent ‘take us, show us’ glance in their eyes. ‘Get out, get out walk’ was his brusque response, ‘its just 800 metres!’ followed by a few Afrikaans words that do not publish that well. 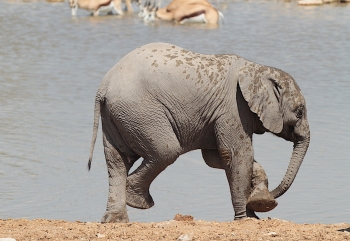 Not many wilderness areas in the world come close to that which can be found in the southern African area where one can see the real wild and wonderful beasts such as lion, elephant, leopard and many many more large and small animals in their natural environments; and in environments where their homes are untouched for the better part of 100 years, for that matter. Its not little camps, fenced in, but huge conservation areas, where we, the people are fenced in while they roam free. Namibia adds to this in that the entire country is sparsely populated and large areas which are not even part of conservation or protected areas, are still fairly wild. On our way back, for example, on a normal provincial dirt road, we continuously were on the lookout for oryx, hartebeeste and more running across the road. We even encountered a cheetah in such a fashion. Thus, Namibia as an entire country provides one with an exceptional opportunity to travel and experience true natural beauty and nature, whether it’s the rough arid desert environments of the Namib and Kaokoland, or the more lush bushveld of the north and north-east.

But before you go, please read up on emergency matters, as the roads are vast and other vehicles passing not frequent. And furthermore, also read and think about acceptable behaviour in such serene surroundings as I’ve mentioned here. Its not nice to have to ask someone in a campsite in the desert to calm down and keep the noise levels down, nor to ask someone to please pack up his drone, as other people would like photos of the canyon without a drone hovering in a corner, or to have a convoy of six bakkies pass you on a very dusty dirt road within very dangerous following distances and then keeping right in front of you piling you under their dust, to mention a few.