Belgium was never particularly high on my list. I’ve always loved the relaxed passion of the Mediterranean nations, Italy, Spain, Portugal and Southern France; the language and ‘joy de vivre’ of France and I was naturally intrigued by the Afrikaans heritage from the Netherlands. To my layman’s understanding of Belgium and Luxembourg they were sort of the mix that wondered whether they were French, Dutch or German, not excelling at one of them, yet thriving on their political stance as home base of the EU. Last year’s trip, (see Summer in the sombre ‘The Somme’) to Flanders was the beginning of my enlightenment, but having spent a magnificent six days over Easter in the Belgian Ardenne, opened my eyes and made me realise that Belgium was a full longed and proper travel destination where you need time to meander, read, listen and just sit around to observe. It is rich in history (not all of it is good though), culture, engineering and finesse. Belgium is sort of my new Number One – sorry Jacob.

We were based in a gîte just outside of Bastogne called Savy555 (find Christine on Booking.com – I recommend that) with a cosy fireplace for the relaxed evenings, a nice ‘stoep’ outside with stunning views over the spacious lawns towards the duck pond end. To perfect the amenities, there is a small braai for the good weather dinners I prepared.

Braai ≠ barbeque nor grill, but for clarity’s sake, let’s use those synonyms if you’re not South African

END_OF_DOCUMENT_TOKEN_TO_BE_REPLACED

The Eifel is not a tower; that one is spelt with a double ‘f’.

The Eifel is a low mountain range in western Germany and eastern Belgium, which spans a renowned scenic rural area. It’s a favourite daytrip destination of mine within an hour’s leisurely drive from Köln and which rewards me with something new and spectacular every time I venture there.

This past Easter Weekend was no exception. When my friend Rudi suggested that its blooming time for the wild daffodils in the Eifel, I bunched the family into the car, packed a picnic of breads, cheese, hams and pesto and headed east.

Flowing hills, bushy meadows and yellow blooming canola fields broken up by patches of forest ensures scenic splendour all the way, that type which is often difficult to capture in words. I did find the ‘Fuhrbachtal’ valley outside of the small village of Kalterherberg easily enough and enjoyed a cool and leisurely stroll down the valley to do some flower searching. It didn’t take much of a search, as in Germany everything is so well organised and well kept that nature walks simply entail following the path. That’s simply what we did, and sure enough, we found some beauties.

The ‘Fuhrbachtal’ is on the border of Belgium and southern Holland, which also means that this is a World War 2 hotspot area. I, however wanted to enter Germany from Belgium, the direction the Allied Forces did on 12 September 1944. So I first drove into Belgium with some small country roads through some magnificent scenery, stopped on the edge of the Hürtchenwald for a picnic and photoshoot before driving through the ugly town of Neu-Moresnet. I had to visit Neu-Moresnet simply to mark of some irrelevant fictitious to-do list item that I have been in the town where Heintje Simons nowadays live. Remember Heintje? He was a darling little singer from the Netherlands who wooed amongst others the South African radio listeners in the seventies with songs like ‘Mama’ and ‘Heintje Boembantje, boem, boem, boem’ or something in that vein. (I have no idea what he was actually singing, but this was how my brother and I sang along in those days).

We didn’t see Heintje, and I didn’t even stop in this town, as what I saw in the drive through was not inspiring at all, plus I was on a mission to enter Germany through the Hürtchenwald and the town Roetgen, find some remains of the Siegfried Line and take some pictures. 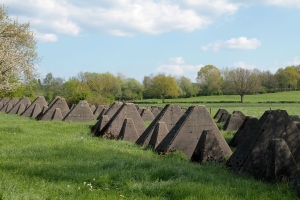 Roetgen is the first German town to fall under American control. They marched into the town on September 12, 1944 at 14.30. After the American forces entered Germany at Roetgen, they engaged the German forces in what became known as the Battle of Hürtgen, a fierce series of battles in the inhospitable terrain of the forest which lasted to December 1944 and in which the Americans lost at least 33 000 men to death or incapacitation. We too entered the town of Roetgen from Belgium and I found some excellent remains of the Siegfried Line. Fascinated to find these remains, I walk amongst them and let my mind wander to the ghastly historic events, which took place at this exact place where I was wandering around; I took some pictures and simply contemplated the insanity of war. As Chris de Burgh so aptly states in ‘Borderline’,

‘But these are only boys, and I will never know,

How men can see the wisdom in a war…’

Hürtgen Forest is however not only the venue of these battles and the beautiful thick forest scenery, but also, according to local folklore, the forest where Hansel and Gretel were kept, fed and oh so nearly served as dinner. We did keep an eye out for them too, but (fortunately) didn’t see any traces of them, nor of the witch.

As always, I chose some further ‘small roads’ back to Cologne and with the usual luck of discovery found a stunning piece of ‘watered castle’, the ‘Weiße Burg’ in Friesheim, complete with moat providing stunning photographic opportunities.

Tomorrow we head off to Holland for an extended drive.